Uterine fibroid (leiomyomas/myomas) are benign (non-cancerous) tumors that originate in the uterus. Although they are composed of the same smooth muscle fibers as the uterine wall (myometrium), they are many times denser. They are usually round or semi-round in shape.

Fibroids are the most common benign tumors in females and typically found during the middle and later reproductive years.

What causes these fibroids is still not known. Genetic abnormalities, abnormality in the vascular system, tissue response to injuries and family history do play some role. Pregnancy and taking oral contraceptives, decrease their likelihood. Researchers show that girls with menarche before 10 years, consumption of alcohol (beer), uterine infection and high blood pressure increase the risk of developing fibroids.

Oestrogen (female hormone) tends to stimulate their growth in many cases, esp. during the first 3 months of pregnancy. Up to 30% of fibroids shrink after menopause but post-menopausal hormonal therapy (HRT) may cause them to persist.

The U.S Development of Health and Human Services states that fibroids are almost always benign (non-cancerous). Rarely, less than 1 in 1000, a cancerous fibroid will occur, which does not arise from an already-existing fibroid. Having fibroid doesn’t increase the risk of developing a cancerous fibroid or increase the chances of getting other forms of cancer in the uterus.

So if someone tells you “You are sitting on a bomb!”, it’s not true.

Fibroids are often described based upon their location with the uterus – 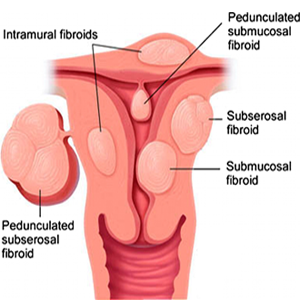 Submucous fibroids are located inside the uterus cavity beneath the lining of the uterus.

Intramural fibroids are located within the muscular wall of the uterus.

Most of them are asymptomatic particularly when small, but can grow and give a variety of symptoms depending upon the location and size like-heavy and painful periods, urinary frequency, urgency or retention, abdominal discomfort or bloating, painful defecation, backache and in some cases, infertility. During pregnancy, they may cause miscarriage, bleeding, and premature labor or interfere with the position of the fetus. Large fibroids may distort or block the fallopian tubes.

Most of the fibroids do not require treatment unless they are causing symptoms. After menopause, they shrink and it’s unusual for them to cause a problem.

Symptomatic fibroids can be treated by-

The conservative line of treatment in allopathy is hormonal to reduce the production of estrogen from ovaries. It is given for 3-6 months or even more but unfortunately can give side effects which are similar to the symptoms during menopause like – hot flushes, sleep disturbances, vaginal dryness, mood swings, depression, loss of bone density, acne, weight gain, muscle cramps, etc.

Homoeopathic treatment can be very efficient and in many cases may be the only treatment you will ever need to get healthy again. It is hassle-free and cost-effective. The medicines help control excessive bleeding and pain, subsequently reduce the size of the fibroid, and finally dissolve it. They also check their recurrence.

Your homoeopathic physician needs at least 3 months of treatment time followed by a pelvic ultrasound to access the progress and see the effectiveness of the medication.

If you, your mother, sister, wife, friend or an aunt is suffering from fibroid uterus, do ask her to consult a Homoeopath and get a treatment of at least 3-4 months, followed by an ultrasound before going under a surgeon’s knife.

This site uses Akismet to reduce spam. Learn how your comment data is processed.

Homoeopathic Medicines From The Periodic Table