Onychomycosis, Tinea unguis or simply ringworm of the nails, is a fungal infection affecting fingernails or toenails in humans. Caused by three main classes of fungal organisms: dermatophytes, yeasts, and nondermatophyte molds, it’s the most common disease of nails and constitutes about half of all nail abnormalities.

The infection may begin as a white or yellow spot under a nail tip. As it spreads deeper into the nail, it may cause discoloration, thickening, loosening or lifting up of the nail. It can also be associated with deformity, and eventually result in the loss of the nail plate. Pain may either result from the spread of the fungal infection or cellulitis with a superimposed bacterial infection.

Fungal infections are difficult to treat as they take several weeks – months to get better and after you grow back your nail, here comes another infection! The fact is, some people are just at risk of having to easily acquire this infection recurrently in their lifetime.

People with onychomycosis experience significant psycho-social problems due to the physically repulsive and abnormal appearance of the nails; particularly when fingers – which are always visible – rather than toenails, are affected.

Here is a case of a gentleman who visited my clinic in December 2013 with the above-mentioned medical condition. It was taking his self-esteem for a downslide. Though there were no complaints of itching or pain or any discomfort, the appearance of the nail itself was revolting for him. He avoided meeting people and going out for dinners etc., even though his top-level executive profile required him to. Eating with his own hands was becoming an ordeal due to a peculiar odor emanating from them.

He was put on a course of regular homoeopathic treatment for less than a year and this is what we achieved! 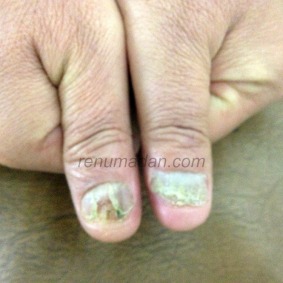 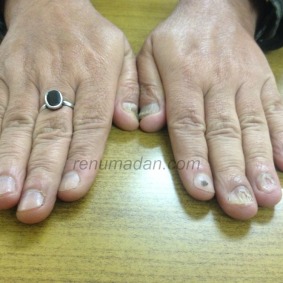 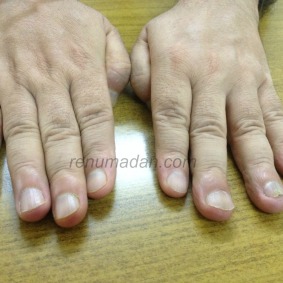 This site uses Akismet to reduce spam. Learn how your comment data is processed.

Homoeopathic Medicines from The Periodic Table